Emanation of the Mandala from the Lotus We, as the father and mother principal couple, absorb ourselves in a balanced union. These are arrayed on the lotus of my hands. Both are yellow with four faces — yellow, white, blue and red — and have eight arms, in the right hands of which the former is holding a conch, a reed pipe, a gem, and a hand-drum, and in the left a lute, a drum, a reverberating gong, and a long brass horn.

Through the purification of the obscurations of the four occasions there are my four Vajras as the four internal ornamental seals of elephant-skin cloak and so on of Vajravega abiding perfectly on top of the moon at my heart as a Holder of the Vajras. But it is in the collection of main daily sadhanas used in Sakya. In my heart, from a PAM comes a lotus, red with eight petals, on the seed-head of which, from AM comes a moon disc, on top of which, from HUM, comes a five-spoked vajra.

By self-nature, they are voidness and a great blissful awareness, in aspect, items for offering and divine offering maidens; kaachakra function, as objects enjoyed by the six sensors, is to enhance a special untainted blissful awareness.

At the crown of my head, to a five-spoked vajra, the principal father and mother and ladies of discriminating awareness pass. 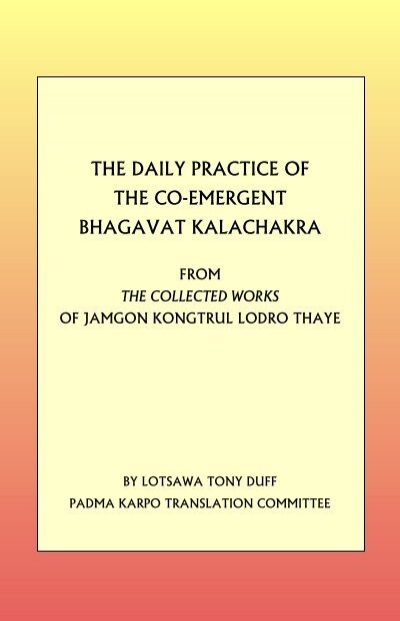 On top of them is a molding of jewels, resting on which is a golden quadruple colonnade. On top of all this, from MAM, comes a great Core Mountain Meru, with the self-nature of a vajra, at its bottom, 16, ancient miles in breadth and at its top 50, ancient miles. From seeing only relative truth, you will eventually reach a profound certainty in the meaning of absolute truth.

Of my four red hands, in the first are a fire arrow, in the second a vajra elephant-hook, in the third a damaru hand-drum replete with its sound, and in the fourth a hammer. Effective practice of this material depends on your level of development of a bodhichitta motivation and a correct understanding of voidness emptiness. As bodhichitta melted from the fires of my great desire, they pass through inside my avadhuti central channel and cascade through the pathway of my vajra into the lotus of the mother as drops, each individual portion of which transforms into the seed syllable of each of these deities of this mandala having Akshobhya as the ruling figure of its family.

Possessing all classic features such as eaves, beautified with hanging pendants, a parapet and so on, this immeasurably magnificent palace is, on top and bottom, black in the east, red in the south, white in the north, yellow in the west, and blue in the center.

Also, Shangpa practices were and are obviously included in Jonang. When it reaches from my heart to my navel — distinguished joy; when it reaches from my navel to the tip of the gem of my vajra and is stopped by the syllable PHAT, I experience co-arising joy with its not being shifted outside. Standing atop a moon, a sun, a Rahu and Kalagni, most playfully with my right leg outstretched, my right leg is red and has underneath it a red Kamadeva, Ssdhana of Desire, with one face and four arms, holding in his hands five flower-arrows and a bow, a grappling-rope and an elephant-hook.

The goddess wives of this demonic Mara and kxlachakra Rudra, namely red Rati and white Uma, hold on to the soles of my feet with their faces bowed down. Once more from the HUM at my heart light-rays invite here empowering deities. Seeing with foresight that the vessel to whom is to be taught the Adibuddha is the perishable world of limited beings who can be tamed through their great desire, we, as father and mother, absorb ourselves in a balanced union.

At my own private place, within a non-objectifying sadhanq, from a HUM comes a vajra, blue with five spokes, the hole of which is stopped with a syllable PHAT.

Chogye Trichen remarked this was all one needed. If voidness, which is not a truly existent phenomenon is regarded as truly existent, this is not correct meditation. On top of it, from LAM, comes a round cylinder of earth, yellow, with a square,ancient miles in breadth and marked with a vajra. Then once more a Vajrasattva, embraced by a Vajradhatu Ishvari saddhana emanated forth and enters into me, while a Prajnaparamita, embraced by an Akshobhya, is emanated forth and enters to become inseparable from Vishvamata.

Of my four red hands, in the first is a bow, in the second a vajra grappling-rope, in the third a gem, and in the fourth a white lotus. Both are black with four faces — black, red, yellow and white — and have eight arms, in the right hands of which the former is holding bowls of incense, then of sandlewood with saffron, next of camphor, then of musk, and in the left a bell, a lotus, the flower of a divine-realm tree, and an assorted flower garland. 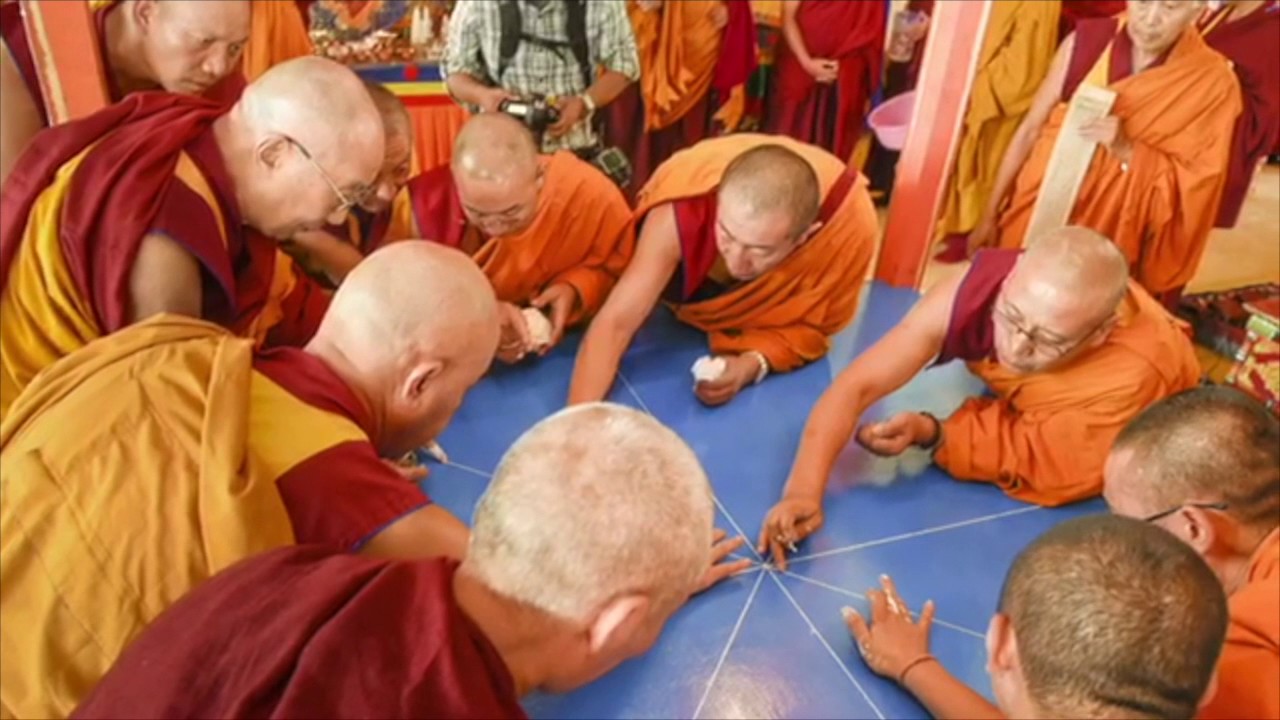 David then wrote the review you can read here. By the light-rays of the kalacchakra awareness sadana my great desire that blaze from the fire of tummo of the syllable HOH at my navel, I, a Holder of the Vajras, a Vanquishing Master Surpassing All, simultaneously with my ladies of discriminating awareness who have been standing on the seed-head and petals of the lotus, melt into bodhichitta, like what possesses a rabbit, and now in the form of drops remain here in the nature of great blissful awareness.

I prostrate to you, O glorious Kalachakra. Her enlightening body is yellow in color with four faces which, circling round from the front to her right, are yellow, white, blue and red, each with three eyes.

Just as the vajra of my enlightening mind shall remain in infinite lands to liberate all beings, so may these beings themselves, through the force of Kalachqkra, do likewise and remain throughout the sashana realms. Then four goddesses, in the nature of the four immeasurable feelings, rouse us with the tunes of melodious songs to do what is of meaningful benefit for those who wander: With the bodhichitta into which they melt from the fires of our great desire, I confer empowerment on these limited beings.

My main face is black, ferocious, with its fangs bared; my right face red and is full of desire; my hind face is yellow and settled into absorbed concentration; and my left face is white, serenely stilled and totally at peace.

This chapter describes in sahdana the Buddhist tantric practice of the stage of generation, including the instructions on the protection of the place of practice, the meditative practices of the origination kalacakra the body and the deities abiding in the body, the yogic practices of the stage of generation, and diverse mundane sadhanas designed to induce the mundane siddhis.

I have a vajra crown kalcahakra, vajra earrings, a vajra necklace, vajra bracelets, a vajra belt with a filigree skirt, vajra anklets, a vajra draping scarf, a garland of vajras and a tiger-skin wrap-around loose from my hips. Of my four white hands, in the first is a wheel, in the second a spear, in the third a staff, and in the fourth an axe.

View Site Map main pages only. Both are white with four faces — white, black, red and yellow — and have eight arms, in the right hands of which the former is holding bowls of milk, of water, of the supreme medicine, and of beer, and in the left, bowls of nectar, of an elixir with a taste that brings actualizations, of ambrosia fruit, and of a cooked delicacy.

Embraced in turn by a blue, six-armed Prajna-paramita, and a blue, six-armed Vajrasattva, they are emanated kalachkara. Preliminaries Arrow kalachzkra Arrow up Instantaneously I arise as a Kalachakra Cycles of Timewith a blue-colored body, one face and two arms, holding vajra and bell, szdhana Vishvamata Mother of Diversityand standing with my right leg outstretched.